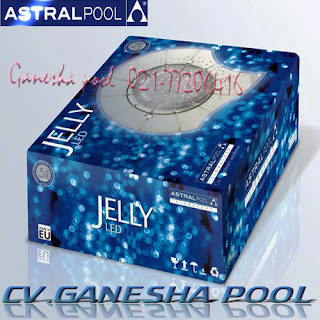 AstralPool is launching the Led Jelly, a new concept in floodlighting that adapts to all kinds of pools (concrete, prefabricated or panelled). It is interchangeable with all other niches of PAR56-type floodlights by AstralPool, which makes it ideal for new and existing pools alike.
The feature that places the Led Jelly apart from other floodlights already on the market is its original and totally innovative design, which is the result of the AstralPool’s collaboration with the industrial design company Giugiaro Design. For the design of the Led Jelly, Giugiaro Design drew inspiration from marine environments in which sophisticated life forms are able to cope with the striking contrasts in transparency and light.
The result of this inspiration is a LED floodlight with a transparent faceplate and radial ribs that substitute the glass that covers the floodlight. This peculiarity means that on looking at the Led Jelly sideways, the wall of the swimming pool seems to form a continuous profile, as if the whole were a single membrane. The faceplate lights up, conducts light through the radial ribs and reflects it onto the bottom of the pool. When the floodlight has been put in place and switched on, it looks like a jelly fish.
Led Jelly: efficiency and high performance
Besides its design, other advantages worth highlighting about the Led Jelly are its efficiency, high performance, long useful life and easy installation.
The Led Jelly is high performing insofar as energy consumption is concerned. Thanks to the LEDs by Luxeon, it combines a brightness of 1,215 lumens, which is three times that of low range LEDs, with an energy consumption that is up to 80% less than that of traditional floodlights. In addition to its energy efficiency, it has a useful life of 100,000 hours, which is 100 times that of a conventional lamp.
As it is compatible with AstralPool’s PAR56 niches, the Led Jelly is easy to install and is able to adapt to most conventional floodlights and LED floodlights without the need to change the transformer or wiring.
The Led Jelly is available in versions with white light and coloured light in a range of up to 12 different colours. It also has nine programmable sequences of colour and light changes that allow users to create a whole host of atmospheres.